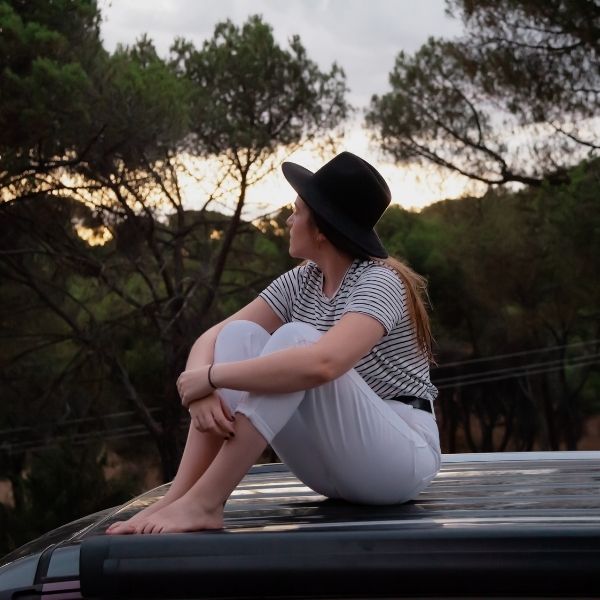 Everything You’re Curious To Know

This is the ultimate guide about Maddie Taylor for 2023.

Over the last 18 months, I have watched almost 30 hours of YouTube videos created by Maddie Taylor, as well as researched as much as I could.

If you’re curious about:

👉 How Maddie Taylor afforded her van

👉 Where she has traveled to

👉 What issues and controversies she has handled

But hey, let’s talk about that later. Back to the beautiful Maddie…

Maddie Taylor hasn’t got an official name for her van.

Maddie Taylor. Her dog has joined her on occasions.

Maddie Taylor drives a 136 Ram Promaster van. It was previously a handyman van that was converted into her home on wheels, including a ventilated roof.

Her van is 2500mm high. She opted for a higher van like this as it allows for full standing room when cooking. She is 5′ 9″ after all.

She did the bulk of her fitout herself paired with some help from her brother and friends. She aimed to create a home, rather than a vehicle.

That said, she doesn’t have a functional shower or toilet on board.

Maddie has made numerous upgrades to her van since it was finished. The only thing that’s really missing is a heater for those cold mountain mornings.

She has experienced some breakdowns:

It should be noted that this is all apart of the experience!

Maddie saved for a couple of years while working part-time as a waitress to purchase her van for $7,500. Her fit-out cost an additional $3,200, plus an additional $900 in mechanical repairs.

This is based upon the value of her van, camera equipment and online business.

Despite having enough money to purchase a house, she prefers the freedom that comes from van life.

How much money does she make and how does she do it?

It’s all quite straight forward actually…

Her income is earned primarily through:

👉 Those Amazon Affiliate links under her videos

👉 Income from a part-time job that she has

Note: The donations via her PayPal account go directly to the charity that she supports, rather than her bank account.

Maddie has filmed some videos with her brother. This isn’t her boyfriend. She is single at this time and is seeking a boyfriend.

Maddie is currently living out of her van in Superior, Arizona.

It would be quite extensive to list out all the places that Maddie has ventured to, but she’s more focused on the journey rather than the destinations that she visits. If you want to see her locations, I highly recommend following her on Instagram!

There have been some challenging moments in Maddie’s journey as a female solo vanlife YouTuber. These include:

👉 Having her van broken down and stranded

👉 The struggles in finding a #vanlife boyfriend

That said, nothing serious has happened in her journey and she has stayed away from gossip culture and controversy.

Maddie is going to continue her van life for the next 2 years. She might then buy a boat and sail around the world, or simply buy a home and settle down.

What can we learn from Maddie? A lot, actually:

👉 Buy the van you CAN afford today

👉 Learn how to do maintenance yourself

👉 Being a solo female isn’t that difficult

And most importantly, don’t take life so seriously.

Her voice is like a warm cup of tea. Soothing, energizing and without the drama or click-bait that other channels possess. She certainly isn’t trying to show herself off, but rather the experiences that are available to each and every single one of us with a vision.

I can’t wait to see what’s to come from her journey. 🙂

Clearly I’ve been hugely inspired by Maddie and her van life story.

It’s clear that she is living the dream because she has online income.

Earlier I mentioned my excitement about a specific business model